If you follow me on Instagram, you’ve likely seen everything in this update – the only difference is that I get to ramble on a bit more here!

January was a busy month for me, as I was still at my old job for half the month, then got the flu, and then went to Liverpool.  But now I’m back home, feeling much better, and getting things done.  To start with, I cleaned my desk area.  I like a bit of clutter, but when things are too disorganised, it makes it easy to procrastinate.  So, here’s the newly-tidied section of the bedroom where I do all my drawing. 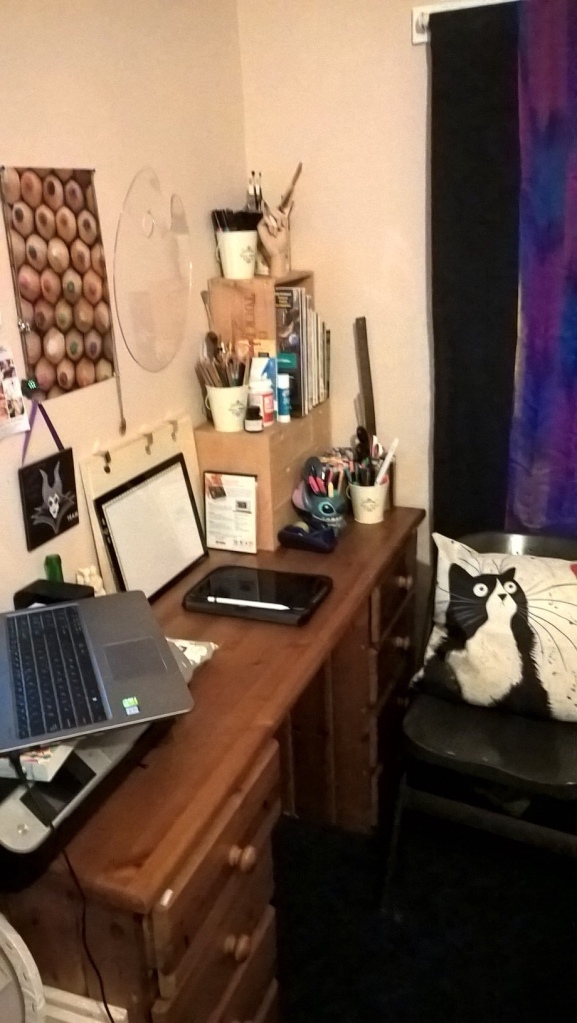 And here’s my cat Buster, “helping.” 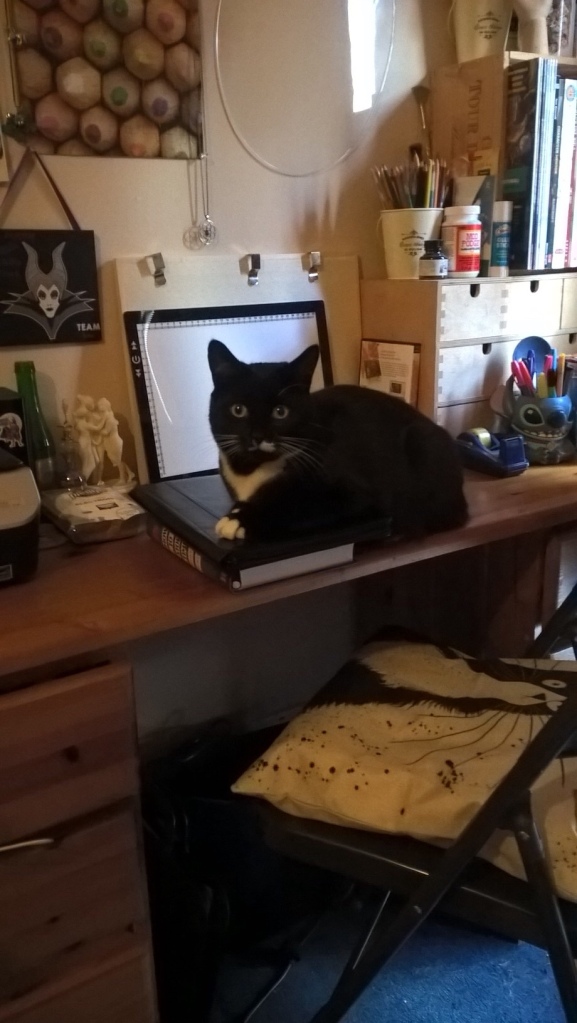 I’m currently working to finish a commission quickly, but I’m being a bit of a perfectionist about it.  The client is a new friend, and someone who’s close to my best friend of 15 years, so it’s very important to me that I get it done right.  Today I have finished the last of three character designs, so all that’s left is to make a few modifications.  I’ll post them here when they’re ready.

Meanwhile, I’ve been doing a few little sketches now and then.  My sister, who is also an artist, challenged herself to do one small drawing every day for a year, and last year she did just that, even under a lot of stress.  I’m very proud of her and very inspired, so I decided to give it a try as well!  Unfortunately, with the mess that January was (and with my own hangups about just leaving things alone and letting them be done!) I only got two sketches done: 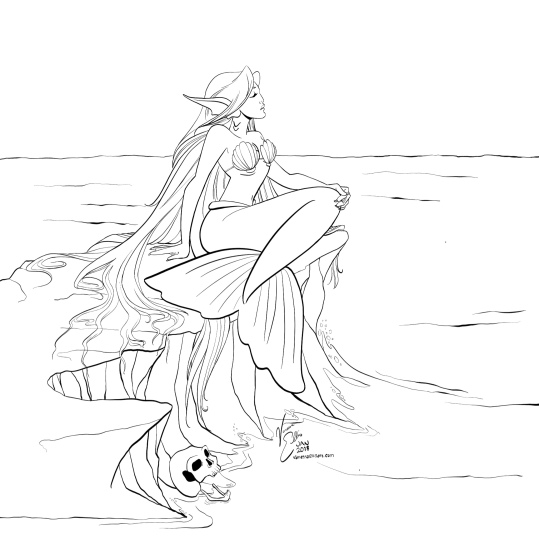 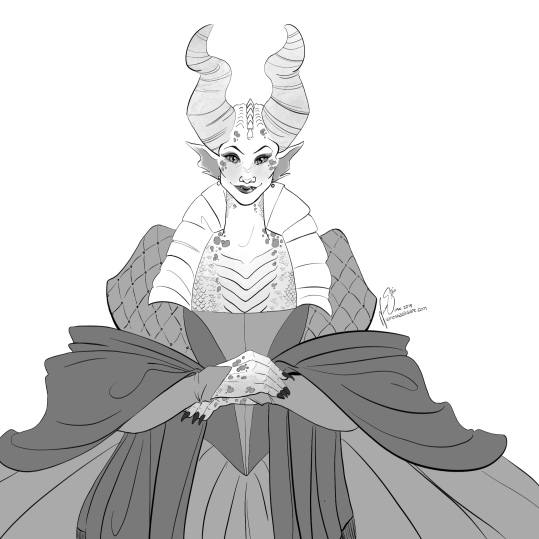 Mermaids have always been one of my favourite subjects to draw, ever since my dad taught me to draw them when I was a little girl.  I love every kind of mermaid, from the more human-looking ones to the monsters, and the first picture is meant to be sort of a blending of the two.  She’s an easily bored mermaid who amuses herself by luring ships to crash on the rocks.

The second one is one I’d like to redraw in more detail when I have the time.  My husband picked up a magazine from somewhere that had a painting of an Elizabethan lady on the cover.  I thought that I would like to draw something like that, but of course I would have to make her a monster!  The headdress in the painting became my lady’s horns, and I made up my mind that she would be part-dragon.  I started to give her some wings but I didn’t like how they took focus away from her face, so maybe she’s just shapeshifted into a form that doesn’t have them, or maybe she’s a wingless Dragonborn!

To start this month, I’ve done a sketch based on a story I started just before I moved to the UK, and one that I hope to get back to writing this month.  I used this image by faestock as a reference. 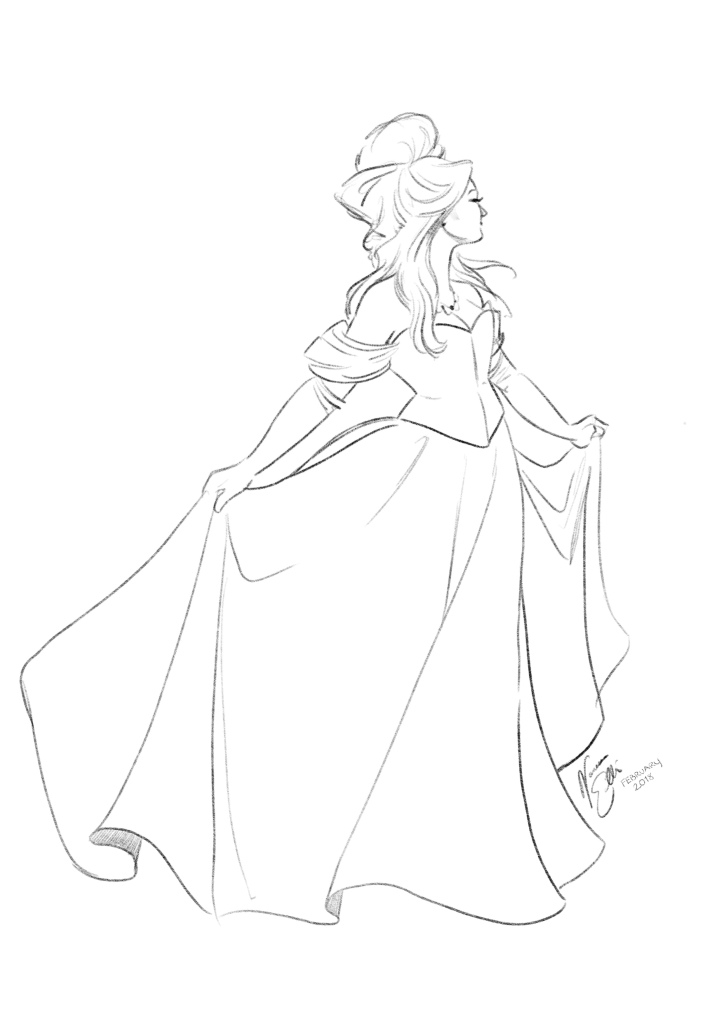 And that’s all for now!  Even though I’ll be drawing something new every day, I’ll probably limit myself to only posting new sketchbook pages once a week.  If you’d like to see them a little more frequently, check me out over on Instagram!