I’ve fallen behind in my regular posting, mainly due to one of the most challenging and rewarding commissions I’ve done recently.  More on that later, but first, artist question number three!

3.  Show us your oldest piece of art you have on hand.

I’m certain that I have older art than this on my external drive, but since I can’t access that at the moment, here’s the oldest piece I could get.  It’s over fifteen years old! 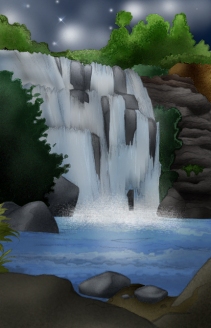 This was drawn in pencil and coloured in a very old version of Photoshop.  I’m pretty sure I used a reference for it, but that’s been lost to time.  Surprisingly, for a piece of art that’s this old, I don’t completely hate it!  I mean, water doesn’t really work that way, the sky looks terrible, and I relied way too much on Photoshop filters, but it’s not all bad.  If I had to do it again (and maybe I will, just for fun), I would make the waterfall more natural-looking and gravity-obeying, the rocks and trees would be painted with texture rather than just having a texture filter slapped on, and the entire sky would be different.  But it’s still not as embarrassing a result as I thought I would find.

Next week I’ll try to figure out how to answer “What defines your artistic style?”

Lately I’ve been working on a lot of stuff that I can’t show yet, but one of my British wrestling clients has released the t-shirt I designed for him.  Spike Trivet is a wrestler known for his upper-class snobbery and tendency toward violent matches.  In his most recent one, he was injured when he was thrown through a mirror and got a shard of glass in his leg.  This t-shirt design commemorates that fight and is available to order here. 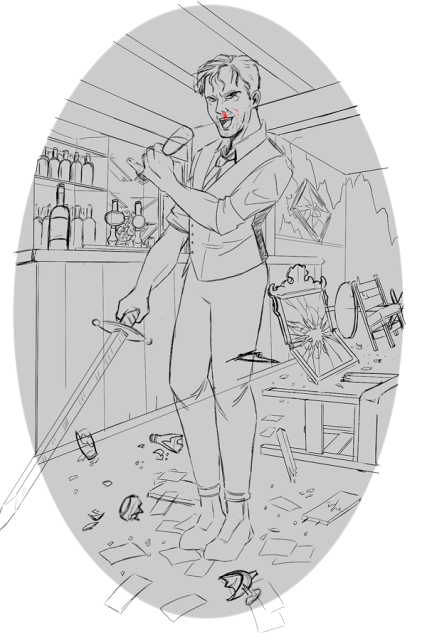 This is honestly one of the most difficult commissions I’ve ever done, mainly due to the amount of detail and need for perspective in the background, but I had a blast figuring it all out and I learned a lot from it.  The colouring was also a challenge since I was given a limit of five colours, preferably Victorian ones.  I’ve never really worked with a limited palette before, but I chose the colours from a sample of Victorian paint, and again, I’m quite happy with it!

Also I have realised that, for someone with a very low tolerance for blood in TV and movies, I find it fun to draw!

I’ll have a lot more to post very soon.  In between commissions, I have been developing more of my personal projects, and I can’t wait to share my ideas!